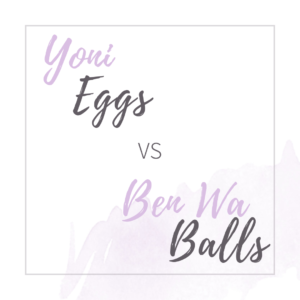 Hi my name is Celeste and I’ve peed myself as an adult. One of the most embarrasing times was when I was only 20, so like barely an adult but old enough to clearly not being peeing on myself.  I was at trampoline park for a college sophmore retreat, I rememeber doing some jump splits and out of no where I just started peeing. I couldnt stop it so as slowly and as discreetly as I could I made my way to the bathroom. I  experienced urinary stress incontinence often, before and after that incident, through laughing and sneezing and I found it strange that this was happening.  I hadn’t given birth, or experienced prostate surgery, I didn’t have a chronic cough,  I didn’t smoke nicotine and I only weighed maybe 130 lbs. So all the reasons doctors say urinary incontinence  didn’t apply to me.

One of the solutions I came across was Kegel exercises. Kegels are exercises that engage the PC Muscles, the band of muscles that circle the vagina.  The best way to know you are contracting your P.C muscles and not you abdominals, a common mistake, is to stop the flow of urination next time you urinate. Those muscles you engaged are the PC muscles. Kegels are important part of vaginal and sexual wellness; many women practice kegel exercises to strengthen the pelvic floor, tones the vaginal canal after giving birth, enhancing sexual satisfaction, alleviate urinary stress incontinence.

Using a weighted object like a yoni egg or ben wa balls can also support you in isolating these muscles.  I personally use both toys and have experienced the benefits and different rituals and practices for each of them. Over time, I stopped experiencing urinary stress incontinence and used some of the kegel flutters I had been practicing in the bedroom 😉 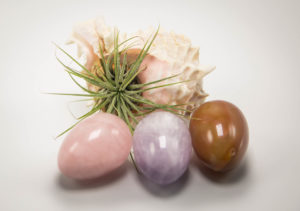 I personally started my journey using yoni eggs, my very first one was a medium, non drilled red jasper.  Yoni eggs are egg shaped crystals that come in 3-4 different sizes from small to large.  Most online sites sell yoni eggs from a large selection of crystals, and some of them may be too toxic to enter into your body. Some of those crystals are also to soft and will break down in moist watery spaces like the vagina. A good rule of thumb when knowing a yoni egg is made out of a safe crystal to insert into your vagina is to only purchase crystals with a 7.0 hardness. These crystals are typically in the quartz family: rose quartz, Jade, Green aventurine, clear quartz, amethyst, obsidian and carnelian. Each crystal has their own energetic healing vibration and properties. So keep in mind the emotional/ spiritual healing you hope to work on when using your egg. Rose quartz enhances self love, obsidian removes negative energy, carnelian increases sensuality, and amethyst increases spiritual connection.

Besides from the different sizes, yoni eggs also come with the options of drilled and undrilled. A drilled yoni egg has a small hole on the narrowest end of the egg. A string can be strung through the hole for easier removal of the yoni egg  Undrilled yoni eggs can be removed using your pelvic floor muscles in a way similar to producing  a bowel movement.  After purchasing your yoni egg, you want to encode your energy and healing intention into it. You can do this in a number of ways: sleeping with it, setting it under the full moon and speaking words of affirmations into it.

My favorite time to wear my yoni egg was during meditation and breathwork. After cleaning my  yoni egg with non fragranced soap, and inserting it with lube or coconut oil, I meditate on an image or affirmation, lately I have been pulling the high priestess card from my deck and using it with my rose quartz. My favorite breathing activity is the ovarian breathing, a breathwork that uses kegels and micro cosmic breathing into activate the ovaries and increase kundalini energy.  If the particular egg I am using is drilled I like to practice the tug of war exercise, which is using the string to slowly pull the egg down the vaginal canal then using your pc muscles to pull the egg back up towards the cervix. Tilting the hips back and forth and can be done during this practice.

Rules of thumb when using either toys:

Interested in learning more about breathwork, and Kegel exercises? Join me for our monthly Yoga with the Moon classes! RSVP HERE

Join our mailing list and receive a free copy of our DIY Yoni Steam Guide
and get notified of our sales and other exclusive offers!

Light as a Feather values the natural rhythm and harmony our bodies align with when we listen and care for our bodies physical, spiritual and emotional needs for childbirth.

Thanks for your message! We’ll be in touch soon.